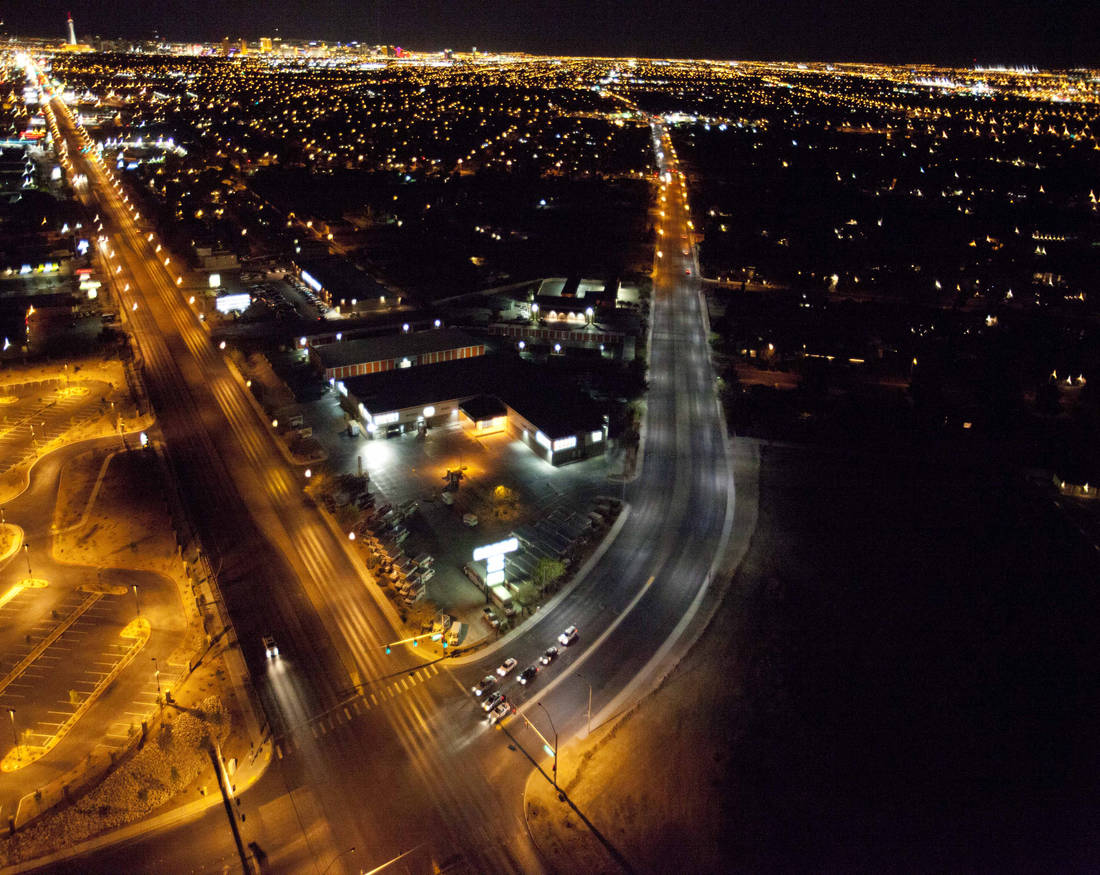 Ed Ebrahimian loves to stare out the plane window on night flights home to Los Angeles. Next time you fly into L.A. late, take a good look and see why. Five years ago a bright orange blanket of light used to saturate the city and stain the air above. Today it’s a metropolis aglow with tens of thousands of cool silvery pinpoint lights. The grid is clearer. The skies are blacker.

“The lights look like candles now, and they aren’t glaring at all,” Ebrahimian gushes. “The sky glow is the most amazing thing I’ve seen in my life.”

Ebrahimian has good reason to be enthused. As director of L.A.’s Bureau of Street Lighting, he’s overseeing one of the largest relighting projects in the world, spending $57 million to retrofit the city’s 215,000 lights, which come in more than 400 styles. The money has gotten him only to lamppost number 155,000 after five years. Replacing the remaining 60,000, including most of the decorative ones, will cost $50 million more.

Los Angeles is a dramatic front in an important and overlooked battle facing the rapidly urbanizing world: the struggle between light and dark. Cities and businesses want more light everywhere for commercial and safety reasons, but our decades-long saturation bombing of the darkness is blowing holes in electricity budgets, confusing and killing wildlife, and completely erasing our view of the stars, the inspiration for millennia of scientists, poets and explorers. “What was once a most common human experience has become most rare,” writes Paul Bogard, author of The End of Night, a book that assails the world’s unchecked light pollution. 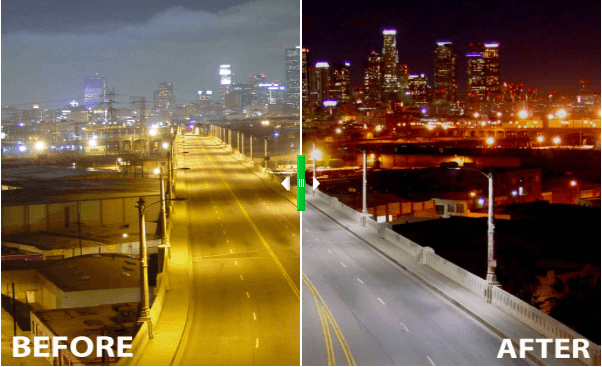 The technology at the center of the shift is the LED, or light-emitting diode. LEDs are a break from the history of illumination. As solid-state semiconductors, they’re more akin to the processor in your smartphone than the lamp overhead. Los Angeles, New York, Chicago, Shanghai, Copenhagen and scores of other cities around the world are deploying LEDs in an attempt to solve most, if not all, of the problems created by inefficient traditional lamps.

LEDs cost three to four times more up front than traditional high-pressure streetlamps, but they last three to four times longer and produce two to three times more light per watt, delivering anywhere from 30% to 70% in annual electricity savings. Because they are digital chips, they will only get cheaper as the efficiencies of Moore’s Law roll on. And as electronic components they’re also far more programmable and connect more efficiently with radio and sensor chips to create citywide wireless networks to monitor crime, power outages and water main breaks and coordinate disaster relief.

The business opportunity in the great LED retrofit is enormous. Of the 140 million streetlights installed worldwide last year, only 19 million were LEDs, according to IHS Technology. By 2020 LEDs are expected to account for 100 million of the installed base of 155 million streetlights. Annual sales of LED streetlights will jump from $4.3 billion to $10.2 billion in the same time period. Boston, Seattle and New York City are all undertaking big retrofits. New York’s $76 million project will be the largest in the country: replacing 250,000 lights by 2017. City officials expect to reap $14 million in energy and maintenance spending per year.

The biggest players in street lighting–Osram, Royal Philips, Acuity Brands and Panasonic–are racing to implement new business models in advance of what will be a cratering of traditional lamp sales. Manufacturers used to count on selling replacement bulbs and components every four years, but LED lights come with a ten-year warranty, though many will last 15 to 20 years. Several manufacturers are focusing on selling software to control and monitor LED networks from a central command center or smartphones. Philips launched its CityTouch management software in 2011 to monitor the energy consumption of each light, spot failed lights and dim or brighten each. The company now collects an undisclosed amount of annual service fees from 260 lighting-project owners in 31 countries. Manufacturers and utilities are introducing financing schemes in which they assume the upfront installation costs and take a long-term share of the energy savings from the city.

“The light industry is changing, so we are looking at what our next step is,” says Martin Oerder, head of Global Outdoor Systems at Philips Lighting in the Netherlands. “We are a bit careful not to specialize in all these fancy things people are discussing. Somebody has to pay for it.” 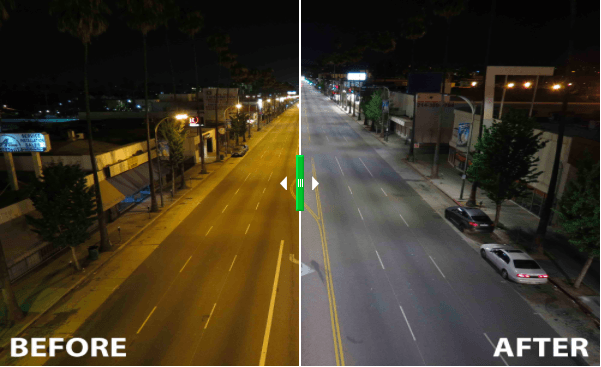 The key will be to use less light overall by connecting the new LED streetlights to motion sensors to eliminate unneeded glare. Some cities, such as Phoenix and Flagstaff, Arizona, have ordinances to curb excess outdoor illumination, but most places are not, like Arizona, home to several important space observatories, which need dark skies. Ebrahimian, L.A.’s lighting director, says dimming the lights would be a big liability headache should people start blaming dark streets for their fender benders.

“One thing that’s been true throughout history is that, as lighting tech gets cheaper, we use more of it,” says Scott Kardel, acting executive director of the International Dark-Sky Association. “Most cities don’t think a heck of a lot about how we use lights at night.”

Los Angeles began looking at LEDs ten years ago, as a way to cut its electric bill. L.A. has the second-most streetlights in the U.S., after New York. Back then LED technology was good enough for traffic signals, but the early models of streetlamps burned out quickly or emitted an overly bright blue-white or uneven light that was too blinding or created shadows. It wasn’t until 2008 that Ebrahimian felt the technology was ready enough to propose the relighting plan. Even at $400 per fixture, more than twice what they cost now, LEDs made economic sense because they would cut the city’s $16 million annual electricity bill by 40%. Two other things were working in his favor: then Mayor Antonio Villaraigosa’s desire to reduce the city’s carbon footprint and the fact that L.A. happens to run its own utility, which financed the first phase of the program with a $40 million loan and $17 million in electricity rebates.

The first phase has been a huge success. Energy use from streetlights fell from 190 million kilowatt-hours to 110 million kilowatt-hours. With improved efficiency the projected savings have since jumped to 63% per year. The city expects to save $8.8 million on its electric bill this year and another $3 million or so in maintenance costs. A software system now measures each light’s energy use and checks to see if it’s working properly. (Conventional streetlights require manual inspection.) All these savings will stay with the city once it begins paying off the loan next year.

What gets Ebrahimian more excited than the savings is the flexibility of the system. L.A. can dim or brighten any individual pole, controlling the lighting network like a digital army, something that isn’t technically feasible for old-style lamps. The city likes the idea of using flashing light paths to guide its police and firefighters toward and away from emergencies, and it may put that practice in place later. The city of Chattanooga, Tenn. also ran a pilot project in 2011 that gave its police officers the ability to dim and blast its LED streetlights from their patrol cars. The city used the technology to reduce crime at a park by selectively shining bright lights to disperse people. Even without making the light dance, L.A. already has seen a reduction in crime. Offenses such as burglaries and vandalism have fallen 10% between 7 p.m. and 7 a.m. since 2008.

For all of LEDs’ energy savings and anti-light-pollution potential, their real promise may be in hastening the arrival of the smart grid. Forward-thinking cities are using retrofit programs to turn lamp housings into intelligent hubs with microprocessors, cameras, sensors and wireless radios. Streetlights can feed the system with information about traffic, weather, air quality, sudden noises and unexpected crowds.

Denmark, a leader in municipal LED lighting with 25% to 30% of its 1 million lights converted, is about to switch on a high-tech test bed in Albertslund, a suburb of Copenhagen. Six miles of road in a half-mile-square area are being outfitted with hundreds of new lights and a handful of control systems from 25 companies, including Philips, Osram and Cisco. The first phase of the Danish Outdoor Lighting Lab, or DOLL, has a three-year, $10 million budget. A control room with a huge screen will show the amount and color of light each light emits and its status in carrying out functions such as dimming or lighting up with the approach of pedestrians and cars. Data from sensors installed in the sewer or water pipes will be beamed to light poles and then on to the city’s public works department for analysis.

“Companies gain a unique showroom by having an opportunity to showcase their products,” says Flemming Madsen, who heads the DOLL initiative. “We can do the matchmaking with researchers, cities and technology manufacturers.”

The money for the great LED rollout is coming mostly from taxpayers, but the payback is promising enough to attract private funders as well. Philips won a ten-year deal last year with the Washington (D.C.) Metropolitan Area Transit Authority to convert 13,000 light fixtures at 25 parking garages. The agency expects to pay Philips with the $2 million savings in electricity and maintenance. Pacific Gas & Electric in California offers to manage LED lighting conversions for cities, from choosing suppliers to securing government incentives to installing the lights, and promises to do the job cheaper than city’s own work crews. Oakland and Walnut Creek, two cities near San Francisco, are customers.

Another new concept for lining up funding involves renting out the real estate on light poles to mobile or cable service providers. Philips and Ericsson launched a program earlier this year, which offers cities a lamppost with a combination of low-power LEDs from Philips and a wireless base station from Ericsson. The venture has yet to announce any customers.

Ebrahimian eagerly awaits the final rollout of L.A.’s LED program. “We are in the middle of a lighting revolution in the world. Lamps have been around since Edison, and in the past few years LED has changed the whole picture. The rules of the game have changed.”